A “fear of death” experience (quick one)

I used to think joggers and jeans were a hideous fashion faux pas, and those that indulged in such lamentable fancies were obviously extremely unfashionably inclined. LOOK AT ME NOW. LOOK AT ME NOW. Quite literally, I wear shoes that double as runners everywhere I go. I brought two pairs with me and they’re not going to last me the year, that’s for sure. Anyway it’s probably something to do with parenting, again.

Moving on and the photo below was taken onboard as we traversed the treacherous Mediterranean seas to peruse Les Calanques, a national park full of breathtaking, vast rocky outcrops and gorgeous little coves with turquoise coloured water. In this picture, I look happy, and that’s because I was. I was, because that moment was captured right before my denial about not being sea sick went overboard. Along with the sense that I was going to be able to get off that boat safely, with my family intact. I.E, not in a rescue situation. To be fair, the man we bought tickets off warned us, asking if we still wanted to go because the wind was really up and the swell was huge. Shane looked sideways at me when he asked, and I said “YES! We will still go. I don’t get sea sick.” Meanwhile, we had just bought a lot of lunch to eat in the form of “sandwich” (baguettes) and dessert – pain au chocolat aux amandes – none of which you would be interested in eating, if the possibility of becoming sea sick was within your realm of being. On the way out of the port, I was focusing on the horizon (thanks Jojo), and was doing really well. At this point, I was only worried about the boat capsizing in the enormous waves, and not vomiting up my lunch. I’m not joking. I consulted Shane after reflective thought about what exactly we would do when the boat flipped. Just to assure you that I’m not overreacting, Shane’s response was, “I have already planned it out.” Here is where you picture me having a silent fit. My fear consumed me as I established a firm grip on Shane’s thigh. On we went, through to the national park where the ocean was more reasonable, and I reflected jubilantly on living another day.

The way back had me full of anguish again. I had to go and sit out the back, get sprayed in the face with ocean water and whipped with icy wind because my stomach was churning. Again, questioning whether or not we would survive to tell the tale of this perilous adventure. I sat out the back of the boat, trying to talk myself out of the urge to vomit and looking slowly at the people around me, wondering if these were the people I would die alongside. It sounds morbid I know, but when the captain decelerates and the engine goes off so that the boat can drift over the waves (I use drift, but that word connotes a sense of calm and tranquility, of which this voyage was anything but) you really seriously question the need to go sight seeing. Stupid tourists. Arlo learnt a new French word on this trip, “mouillé,” which means wet. Shane has informed me that whilst I was out the back, a wave hit the front of the boat where they were sitting, before they were forced inside (so they weren’t thrown into the water.) Now, we all know that events which inspire heavy emotional ties, whether negative or positive, make a sturdy imprint in the hippocampus. My child is scarred from this trip. He’s also one step closer to becoming bilingual. JOY.

I just wanted to share the novel experience that could be called a “close encounter” whilst still fresh in my mind. Now I’ve also shared my biggest fear! Calm ocean = yes, King tide = no. 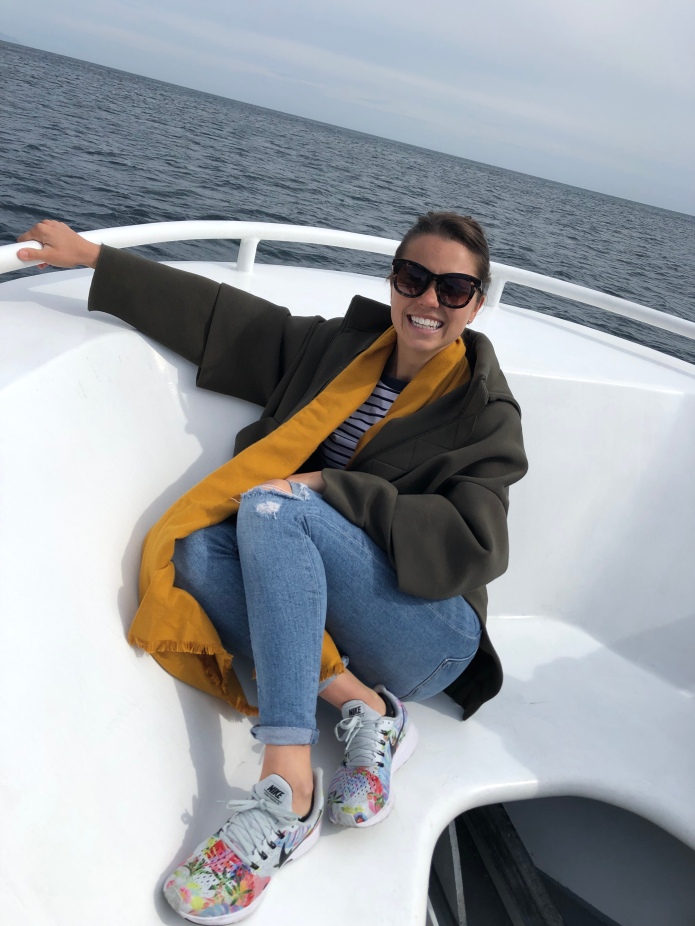 This photo below is my all time favourite of these two males. There can’t be a better one!

This last photo looks like I am going to give that lucky lady a little kiss on the temple. Arlo not so happy about it?

"If you can't say something nice, don't say anything at all." Cancel reply

This site uses Akismet to reduce spam. Learn how your comment data is processed.

1 We have a tendency to rip them out. Their insurgent growth pervades our persistent desire to remain in control, of something, anything in this world, this world that continues […]

An Important Reminder: on loving your kids.

I write this to the chorus of mama, I love you by The Spice Girls and I am overwhelmed by feelings of gratitude for my life. Today I’ve had both […]

I was awoken at 1:52am to the sound of my earbuds dying. I had fallen asleep during my meditation at 10pm and slept, for once, soundly, until that annoying little […]

In all we’ve learnt over the past two and a half years, and my has there been much, my focus has pin pointed in recent times to one particular thing […]

Yesterday, a Prado rolled down the gravel driveway which was white, originally, but looked as though it had been sprayed with red dirt. It had a trailer attached, and inside […]
Goat-scapades

I’ve been reading. And at least I’ve been reading, whilst I haven’t been writing. For this reason, I’ve decided to share the books I’ve finished, because I only finish them […]

Sleep quietens the hive of action from the outside world. Once slept on, if the mind settles deeply enough to allow it, a problem is no longer seated at the […]
Loading Comments...
%d bloggers like this: